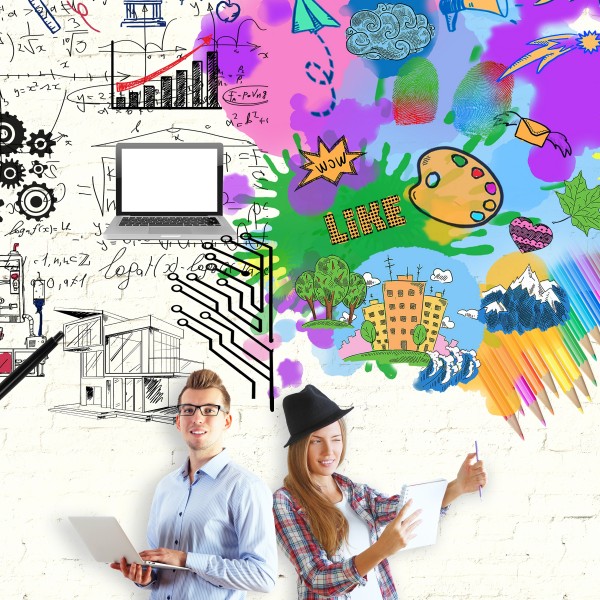 Is your behavior full of empathy, patience, the ability to develop dialogue and create ideas, or is it more determined, bold, action-oriented and concrete? Logical. No embellished and exaggerated feelings?

I believe that the mixture of the two is the right one, but only when it is appropriate and adapted to the person on the other side.  Depending on which principle he's more dominant.

We all have archetypal allies who help us live our life story, to discover our true identity and our purpose – our why? Archetypes serve us as helpers to navigate through everyday life. They enable us to be more aware of who we are. And also helps us to choose the right behavior in any given situations. To respond in terms to get results that we seek for.

One very effective approach based on the psychology of C. G. Jung and "Jungian coaching" is understanding the archetypal internal force or the female and male energy or principle that drives us. The same is in traditional Chinese medicine (TKM), the principle of yin and yang. It is about the design of duality in man and nature in general. A concept that works mutually - opposite aspects of living, polar, at the same time complementary and interdependent. Yang energy as a man's energy or Animus and Jin's energy as a woman's energy or Anima.

When we understand what are our unconscious processes or patterns of being and doing, and then we can find creative ways to consistently test and develop behaviors that has meaning for us and our interpersonal relationships.

It is very important to understand our dominant energy archetype. We each embody both aspects to some degree, and at certain times and places. And yes, we also have a tendency towards one pole, one side, which is both a strength and a liability within us.

Yet in process of personal and professional growth it is meaningful to recognize the dominant pole, which for sure is our preference.  And then, if we don’t want to be stuck in “dilemma or challenge”, “bad relationship”, “problematic leadership style” ect..we need to realize, that what we are doing and is causing us problems, isn’t working.

One has both archetypal potentials in it, it depends on how developed they are and how much we are in touch with them, how balanced they are. We can say that it is two parts of the whole that should serve to balance each other, but usually one is developed more dominantly.

So here the process of self-discovery starts. With use of Jungian coaching we can activate polarities reservoir, and take out what we need, from the other pole, when we need it, to face with the dilemma from another angle. It is about cultivating agility in our behavior. In expanding our perception of who we truly are.

What this means practically?

Integrated Animus, a positively developed part; Animus, which is involved in a healthy female psyche, usually has the following aspects:

Overdeveloped – displaced Animus or negatively developed part or unhealthy aspects may show some of the following symptoms:

Some of the characteristic properties of displaced Anime, negative or unhealthy aspects are:

Mary is a client, female in her 40. She is in a role of a leader but recently facing with a lack of engagement and motivation from her team members. Performance has lower, there has been quite some conflicts within the team, so she was sent to a leadership coaching. After conversation and intake with JC Getting to know you and also some other tools, we realized that Mary is dominated by the male principle and it manifests itself in excessive rationality, goal orientation, planning, conciseness, finding logic rather than emotional action. When her conscious male principle expresses exaggeration, or negativity, she even becomes brutally bossy and sharp. All this is also reflected in the communication itself and interpersonal relationships. Others perceive her as aggressive and cold, bossy and even sarcastic. Intimidating and uncomfortable to work with. In this case, that same person was in a hero quest to meet the shadow part and learn how to balance her subconscious female principle. Mary in coaching process did connect with her female subconscious pole, she activated the polarity reservoir and work hard to become more empathic and patient. Soft. Such behavior enabled her to become more assertive and interconnective. Participating.

With Mary's high motivation to work on and use of FM coaching tools this was possible. And she was being aware and doing on hers balance and flexibility. At the end, the results were shown in totally different team dynamics and engagement. Psychological safety that she was able to create. In 8 months, due to her behavior transformation also the behavior within team change and reach the level of performance as it was, before she step into a role of a leader.

So the take away was become vulnerable and work on yourself with yourself to be better working with and for others.

If we sincerely seek the opportunity to develop within ourselves and ask ourselves what we can transform in our actions and in response to others if facing problems, we will find for ourselves the right answers and ways to avoid unnecessary conflicts and misunderstandings.

So let's observe what principle prevails within? Which one's in denial? Which one isn't developed? Which one shows up when we are in conflict with others? This will be a good starting point to work on.

If you want to discover more, check our Jungian Coaching School program, or book a Jungian Coach for introduction session.